No one has “read” the altar from Skolity!

At these words I set my ears. Because how could it be possible that there was no attempt at all to read, understand and explain this ingenious piece of art work!

But first – a few words about the person of the founder.

Johann Hannovius (better known as HANNOW) was the nephew of Johann Dantiscus (so he was son of his sister – Anne de domo von Hoefen).

He was born in Gdansk (Danzig) –  as most of the canons of Warmia.

The education of the young bourgeois was financed by his mighty uncle. This was the same situation, as we know from the biography of Doctor Copernicus. And this was nothing new; after all, the family had kind of duty to care for children. Such records can be found in wills. Copernicus also held the care of his widowed cousin of Gdansk and her offspring.

After graduation in Chelmno, Johann was sent to Krakow for further studies. The books of the Cracow University show him in 1541. In the kingdom’s capital, he was cared for by Stanislaus Hosius. And he probably worked in the royal chancellery.

He took over his Frombork canonry in February 1546 and settled at the Cathedral Hill. There was a custom of permanent residence of the canons at the Warmia Chapter, so Johann settled in Frombork. As all canons – he also received stalls and the altar of his predecessor, and the right to purchase the mansion and grange (allodium), bringing a nice income.

He died in Frombork in 1575 and was buried there. Somehow it had never occurred to me to find his tombstone…

It was not the only Hannow in the Holy Warmia (Holy Ermland). Besides him, there was also his brother Casper. He had a Ph.D. in both laws, after graduation both University of Cracow and later in Rome. His education was also financed by his uncle. Since 1545 he was canon of Warmia, and dean of the collegiate chapter in Dobre Miasto. In 1547 he became canon in Wloclawek. He was a friend of Bishop Martin Kromer.

By the way, thanks to a little record written by Kromer – till today we call a certain Anonymous – Gallus Anonymous. And thanks to the discovery of the chronicle by the scholar Bishop (the so called Heilsberg Manuscript) we can read it till today…

And as for the name of Hannow – it is worth remembering Michael Christopher Hannow – living in Gdansk in the years 1695-1773. He held a professorship in Gdansk Academic Gymnasium. At the same time he was librarian and has begun work on the “Catalogus universalis alphabeticus Bibliothecae Gedanensis Senatus”. He was also among those who in 1743 created in Gdansk the Societas Physicae Experimentalis (since 1753 called Die Naturforschende Gesellschaf).

Moreover – Michael Hannow ran in Gdansk regular meteorological observations in the years 1739 – 1752 where he used a “thermometer which was a combination of Florentine and Fahrenheit thermometers”.

But let’s go back to the Hannows in Frombork… Besides the two already mentioned above, there also resided Simon and Valentine.

And what does it all have to do with the altar from Skolity?

A few words about the village itself – Skolity (German Schlitt) is a village in the municipality of Warmia-Mazury Voivodeship.

Next “dry piece of information” says that the village was located by Bishop Herman of Prague in 1348. And – at the local rectory Napoleon spent the night of 4/5 February 1807, (as if it was most important.)
Just a few words about the church… That it was built in 1709 and enlarged in 1907. The mention of the altar – that is preserved and can be seen in the north transept. For now, however, it is in the Museum in Frombork, and pleases the eyes of visitors!

And a little more about the church from the immortal Wikipedia:

“The village has a historic parish church dedicated to Nativity of the Blessed Virgin Mary. It’s a long building with one aisle. It has a pseudo-Gothic choir and transept (1907). The aisle was built after the fire of 1708 on the site of two earlier buildings. The new church was consecrated in 1709. The tower at the bottom was built in a “pole construction”, and is timbered. The ceiling inside the church has polychromes (1753-1763), probably painted by Ferdinand Guillerepsa of Dobre Miasto. The high altar was built in the baroque style (1684), with a painting of the Adoration of Madonna and Child by a group of saints. They were probably painted by George Piper from Lidzbark Warminski. In the church
there is also a historic Renaissance triptych from 1557, founded by John Hannow, a canon of Warmia. Near the village there is Lake Skolity. It is located in basin of the river Pasłęka. It covers an area about 40 ha; average depth of the lake is 3.6 m. The banks are overgrown with trees, mostly alder. “

And that’s all… And below: Skolity shown on the map:

According to tradition, in 1557 Johannes Hannovius founded the triptych for the church in Skolity.

At least, this is what the official information says. And what is the true story?
J.S. puts forward the thesis that the altar could actually have been funded for the temple of Frombork. This would point to the character of Virgin Mary and St. Andrew.

The Frombork Cathedral has two names: St. Andrew (this name was brought from the former church in Braniewo), and Virgin Mary – already tradition in Frombork.

Well, then comes the joy of reading the entire triptych…

A couple of comments arose in front of the altar. The answers to many questions are all too visible in the main image. Enough is to say that we spent two days in front of the altar, vividly debating. We – means me and my two colleagues (we always go to Frombork together). Simplifying (very much simplifying) – we have seven sacraments and the Church as Foundation** of the World (interesting is that it has such a strong chain) and there are ten Doctors of the Church…

And well, here we have a flop…

During translation of this text from my Polish blog it occurred to me – that some of these Doctors were promoted only in the years 1567-1588. So how could this apply to the foundation of the altar? Who are those  ten figures with crosses, since the Four Doctors are listed on the Foundation of the World?

Now – I have received help from a theological expert:

She wrote that, those ten – are the popes… And they function rather as an idea than people.

** I interpreted this wrog – as Faith is foundation of the Church (world at that time). 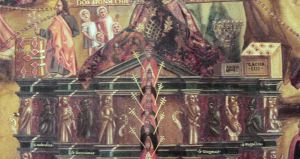 Unfortunately my theological knowledge is – to put it delicately – more than mean. 😉

Well then, there is a lot of work ahead of me….

In the meantime let us enter into the more stable ground. The time of the foundation of the altar is interesting.

It was the time of the Council of Trent and times right after the Schmalkaldic wars. It was because of those wars – that the conciliar deliberations were postponed.

Also in the milieu of the canon there were still controversies concerning the cases of apostasy within the Chapter itself. A set of correspondence between the canon and his uncle-bishop is preserved. It concerns Alexander Scultetus (who finally became a Lutheran, quit canonry and married).

Besides – not so far was the court of Duke Albert of Prussia. And there – one of his most trusted courtiers was Georg von Kunheim. His son (Georg the Younger)  married Magaretha Luther (she was Martin Luther’s daughter). The famous Albertina University worked in Königsberg.

And in this context – the Holy Warmia seemed to be a small island of Catholicism on the great ocean of Protestantism.

There are many details in the altar’s main picture, ordering to set ears to the history and History, and even ordinary gossip (still we need to remember that the Big History consists of small histories…).

I’ll have quite a time 😉

In this whole entanglement in the four corners of the main painting – there is a full of expression image of Martin Luther thundering form the tower (!) of a collapsing Church. Although in my opinion those are: Martin Luther, Huldrych Zwingli, John Calvin i Philipp Melanchthon.

“… yet in the 1556 in Prussia it was not fully realized that the split in the Church is imminent. It was one year after the Treaty of Augsburg (1555). The discussion started over the declaration.  Stanislaw Hosius the Bishop of Warmia and president of the Prussian States argued that the said confession is wrong.

Two Lutherans answered: both governors – one of Malbork county:  Achacy Cema and the second from Pomerania county – Fabian Cema. Both argued that his wrong confession within the last 30 years did settle well in Royal Prussia, and can not be removed in three months as the Catholic bishops demanded. There was still a long way to obtain the religious privileges, but the Prussian states felt emboldened by events in both the Polish Crown and the German Reich, which were introduced in the year 1555. It was the year of the Augsburg religious peace between Protestants and Catholics recognizing the principle of “cuius region, eius religio”.

Now, the great Prussian cities (Gdańsk, Toruń, Elbląg) took double efforts to gain religious privileges. December 30, 1556, Chancellor Jan Ocieski responded to the envoys of those cities – in confidence – that the king can not take any “heretic” privilege, because of the pope, the emperor and other Catholic princes, but since the Reformation has become a fact – he is ready to “look at it and practices of its adherents through his fingers”.

The biggest obstacle for the followers of the Reformation teachings was the bishop of Warmia who was Cardinal Stanislaus Hosius. He fought unsuccessful battles for the conversion of Elbląg citizens (Elbląg lay in the Diocese of Warmia), sometimes calling them “Elbląg goats” and their spiritual leaders he called the “Ministri Satanae”. His position was unfortunate, because even in the Chapter – the canons of Warmia (in perhaps exaggerated opinion of Duke. Albert of Prussia) were to be followers of Luther. This letter of 1554 was found  in the  one of the collections by professor Janusz Małłek.

(this is a bierf translation I did of a fragment of an article on a Baptist site. It was written by prof. Małłek – and it concerned Protestantism in the Pomerania. Unfortunately the whole is only in Polish). It shows what turbulent times Hannovius lived in, and what were his worries.

The continuation of the story appears to be a puzzle, especially in the context of the naive expression of the founder’s eyes …