As a tour guide and tour leader – I travel a lot. I travel not only with tourists, but also to prepare the tours, or running a query or just for pleasure.

The areas of my interests include both Pomerania and Warmia-Mazury, but I also travel all over Poland.

And of course, a place where every seeker of the past always stops, is the church – especially if it is old medieval.

Whenever inventorying the church compounds – I also take pictures of the church walls, because they can reveal a lot of information.

Whenever I looked at the church walls, my attention was drawn by small – which look as if they were made by a spoon. They are either round or in a shape reminding of a trowel. They are usually gathered around the main (west) portal, as well as on the south wall, more or less to where inside the sanctuary starts (but this is not the rule, because the holes can often be found on the east wall as well).

In general, holes are located at a height convenient for a man, but sometimes I had to bend down to photograph them. However, on some church wall they are higher, and sometimes even on the north wall. Sometimes also above the northern porch, among the later bricks. The question is whether they were re-used? I did not find such holes on the wall of the monastic churches – which is natural, considering the monastery buildings (usually on the south side of the church).The situation of the holes around the western portal and the south wall is connected with the fact that this is the bright side (with light), and as far as the portal itself…

Christ says in the Gospel according to St.. John:

„I am the gate. If anyone enters through me, he will be saved. He will come in and go out and find pasture. … „

But back to the holes and bricks ….

I started to collect the hypothesis on this subject, as well as information on whether and where else outside of my area such holes can be found. I learned about such ones in Sweden, Brandenburg, Mecklenburg, or on Rugia. They can be also found throughout Poland.

One of the hypotheses is the expiatory nature of the holes. Namely – the sinner after confession – celebrated penance drilling the wall of the church with his finger. I checked… After such an experience for a few days I had my fingers wrapped with plaster. This theory has fallen as illogical.

Almost as popular as the previous one – is a theory of quackery. Indeed, consecrated dust was added sometimes to fodder for cows, or sometimes it was used by local healers. However, the marginal use of such dust, and then numerous pilgrimages – raises the idea that if actually anything like that took place, might have happened in the shrines to which people went on pilgrimages.

There also is a version that into such a hollow the ill blew their illness. But – there is some doubt that the church – especially medieval would allow such practices. And besides – what if there are fewer holes in some places, or there is a lack of them? Does it mean that such community was healthier? Most reliable is a theory of fire bow, or as sometimes called: fire bow drill.

I found in the internet a short video of how a fire bow drill was used  (it is  more or less similar to the medieval one) .

Some of the holes in church walls are deeper other shallower, some more blackened with smoke than the others.

On the photo below we can see strange traces on the walls of St. Johns’ Church in Torun. 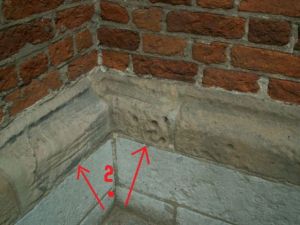 Is it possible that the fire bow drill left such traces?

What finally did the holes mean and why they were made?

When Christianity was just starting here (on today’s Polish lands) – not only churches were built in places of ancient religious practices. Also adopted and “tamed” were many old habits and beliefs.Especially important was the solar cult (worshipping of the sun). A

ll peoples, from the ancient Egyptians through the Slavs, Germans, Scandinavians as well as the Prussians – have worshiped and still worship the sun and fire. Often without being aware of it, we are very strongly embedded in the beliefs of our ancestors. And in superstitions…

As the sun comes from the fire – the fire gods were once important figures in the pantheon of deities.

For the Prussians – the god having power over fire was Perkunas (the equivalent of the Norse Thor).

Lithuanians and Samogitians burned an eternal fire for Perkunas, which was guarded day and night by Guarding Virgins.  Had this fire ever went out – it had to be immediately kindled…

I deliberately mention Perkunas, because among many holidays – also Easter was devoted to him.

And here it is close to the holes in the bricks. In pre-Christian times today’s Easter period was celebrated as a transition from darkness into light. From darkness to life. A fire gave life. Ideally, when it was kindled. The fire was kindled with fire bow drills. Once this was being done on a sacrificial altar, or against the base of the monument of a deity. Then on the plinths of the temples or even on their walls. And hence these traces in the walls. One end of the drill was based on the slat; the second was on the wall…

From fire obtained in such a way – a Paschal candle was lit, being the symbol of the Risen One.

After the liturgy, the faithful took the fire to the house and instantly rekindled the hearth. In some parishes, the custom has been preserved till today.

When were the fire bow drills given up and were they replaced with a stone flint? Or maybe at the same time both were used? It is not know exactly, as this aspect of rituals is somehow bypassed by researchers.

I mentioned the flint stone because besides the round holes on the church walls – there can also be found characteristic spindle-shaped holes as well as ones like traces of the trowel.

Here are the holes in the wall of the church of St. James in Olsztyn

And here again there are many hypotheses concerning the origin of these strange traces One says about a sword hitting the walls of the temple for luck – and it was to be a form of consecration  before the battle of arms / expedition / war.

Another says about sharpening of weapons against the temple walls, and thereby sanctifying the blood shed in battle. No one would have done this – especially with such high prices of swords…

Which of them is the right one?

Such holes can be found on the walls of stone and brick temples, even on the timer ones too.Later this custom disappears. When did this “LATER” happen? Had the Reformation any impact on it?

Or have other aspects of religion come to be in fashion? The traces of the past continue to surprise us sending us some information ;), yet not always we are able to read them properly.

I sometimes wonder why don’t we want to believe in simple and logical explanations.

I understood the answer on April 11th, 2009… On that day my granddaughter was baptized. For me – an atheist or maybe rather an agnostic – it WAS an experience. Not the baptism itself, but the whole entourage. …

It was Easter Vigil. The priest said something about putting off the lights.  Everything went dark, and the crown (it was a group baptism) flooded out from the church. They all went through the south west door of the church…  They whirled there for some time (I did not go, sure they’d return sometime) performing the mystery of light. And finally when they returned – everyone had in their hands a candle.

And suddenly I realized what a ceremony I witnessed!!!

Today no one makes the light against the church walls, but ages ago???? Of course they did! After the whole warm day – the south and west walls were the warmest.

The religious person will explain it – that the south side this is “good” (can be compared to construction of monasteries and churches – e.g. the Cistercians – north side was dark and bad – so there is a church to protect the monastery against evil) The meaning of Holy Saturday is the awakening to life. Fire – is life and purification. It must be holy. And that on this occasion ancestral faith (Pagan) is being adapted to the new realities? Why, even the churches were built often in places of worship of the old gods…

Kindling of fire disappeared in the sixteenth century … Protestantism brought many novelties, and often shattered the so called “old customs”. It is always so – we bring new customs, thinking they are the best 😉