Some time ago I was captured by a marvelous portrait of Agnes von der Groeben, and now – I have “stumbled” upon another remarkable woman from this land.

And everything – as usual – by accident …

Well, during our short holiday in Galiny (Galingen) – we went to Kętrzyn (Rastenburg), as I wanted very much to see the tomb banner of Botho Zu Eulenburg. The tomb banners were popular in the 17th century and later. Not many of them survived – as the material is not resistant to time and… wars (and those were numerous here throughout the history).

En route we dropped to Łabędnik (Groß Schwansfeld) – well, not everything has to match our imagination… And then we drove through Garbno. Just drove… not even giving the place a bit of interest… 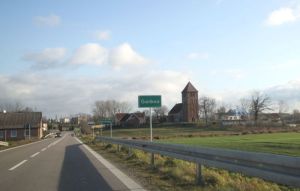 What a pity we did not stop there!

To answer this – I have to start from the beginning 😉

Once upon a time…

In the Prussian times Garbno had a different name… In the 14th century it was called Laumygarbis, and in the next – 15th century the place was called Lamegarben. The name of the settlement may derive from Prussian language. “Lamem”, “lama” – meant marshes, swamps, wet place, and “garbis” – meant the hill. And so it was a “Hill among the marshes.” Also it sometimes can be read that the name derives from the word “Lauma” – witch. And the translation of the name as “Hill of Witches.” Probably the will-o’-the-wisps were mistaken for witches. 😉

And then, a standard history of these areas swept through here.  Namely: the Teutonic Knights and their new orders. Castles, manors and firstly the fortified churches were built in these lands. The newly built churches were often placed on the former (pagan) worship sites.

And so it was with the church in Garbno. It was built on a hill, probably on an ancient place of Bartian worship. See the map of the Prussian tribes (clans) in the 13th century.

The castle is not preserved – as it was destroyed during the Thirteen Year’s War .

Of course the new propaganda wanted and had to tame the place, so they made a legend about the lamb appearing at the same time and in the same place. Whenever it was caught – it escaped miraculously just to appear again in harvest time… So the church was built in the place of the lamb’s appearance.

We must however remember that the place was give to the free Prussians. Contrary to the popular belief, the Prussians were not exterminated by the Teutons. The were assimilated probably more or less in the 16th or 17th century. In the 13th century a village was founded – today’s Garbno –  based on the Kulm Law. And then, as it often happened here – the history changed its course.

In the beginning of 1521 the then Teutonic Grand Master – Albert handed ca. 14 włóka (włóka means today’s 17,955 ha, or ca.44,4 acres) of land in Garbno to Heinrich von Egloffstein. And the village stayed in the hands of this family until 1832.

However – probably the village was leased to a von Buddenbrock family while the Egloffsteins lived in their palace in Arklity (Arklitten). Here at the beginning of 1810 Gustav von Buddenbrock was born. Later he became a Prussian army officer and a Knight of the Order Pour La Merite (for participation in the Franco-Prussian War).

In 1832 Garbno gets a new owner, a Christian Bierfreund. After a few years – the property goes into the hands of Lieutenant Konrad von Redecker, who in 1856 sold it to Edward Krause.

In 1880 the property was handed to Otto Boehm of Głowbity (d. Glaubitten). And this is where I “stumbled upon” the aforementioned remarkable woman. Otto received the property from his father on the occasion of his wedding with Miss Elisabet  Steppuhn of Łękajny (Landkeim).

Elisabet founded the first in Germany Village Women’s Union (22.02.1898r.). The main goal of this Union was primarily education of village women and enabling them to exchange experiences. This was not all, as the Union also dealt with distribution of preserves.

Elisabeth was the organizer of the school network for women throughout Germany. These schools were aimed at preparing women to conduct household.  The idea was adopted both in Europe and overseas. Polish Village Housewives’ Circles also rose from this movement.

In 1911 the Boehms were forced to sell the property and moved to Konigsberg. The reason for the decision was Otto’s illness. However, this did not slow Elisabet’s activity. With her own funds she set up a foundation, which opened a school for housewives and village women in one of the districts of Königsberg (Princess Cecilia School in Koenigsberg-Metgethen).

The times in which Mrs. Boehm worked were quite difficult for women. In the social sense they were in fact just an addition to the man. All that was expected from them (simplifying of course) was diligence, good manners and the ability to give birth to the successor/heir.

The Village Women’s Union made a bee their sign. It was not only that it was a symbol of what was required of a village woman to be like (work like a busy honey bee). Also because the Union systematically tried to change the mentality of women. So that from the docile and passive (not to say even mindless) robots working on farms, they would become conscious companions of their husbands.

From today’s point of view – nothing extraordinary. But then it was almost a revolution!

The “work at the foundations” done by the former owner of Garbno was acknowledged and appreciated. In 1920 Departments for Practical Training of Village Women were established within the Governmental Boards of Agriculture .

In 1929 Elisabet Boehm received Honorary Doctorate from the University of Königsberg and an honorary citizenship of the city.

At the end of the twentieth century – in 1993, Elisabet image was shown on one of the German post stamps in the series “Famous Women.”

In 1998 a plaque dedicated to his exceptional woman was placed on the wall of the Garbno manor.

Elisabet Boehm was not only clever and wise but also beautiful.

Well … In 1911, it was acquired by Erich Schultz-Fademrecht. He was a famous breeder of military and agriculture horses. He ran the farm until January 1945, being also the last mayor of the village.

And then in 1945 the Russian front came, or rather hailed down on this land,  and… again new times stroke. Is this the last curve of the history for this place?

And I would have never learned about this all, if I had not found a “Newspaper in Kętrzyn” from 2006 with an interesting article about this remarkable woman…

And… I thought it was all, that I could not find anything more. I was wrong 🙂 Internet is a wonderful device – and a splendid way of contacting. Recently I received a note on this article. A VERY precious note, as it comes from a member of the Boehm Family… In fact there were two notes (they can be found in the comments to this article). I put them together – and here I am pasting them as one. A very interesting supplement enriching my notes on Elisabeth. Now, she became even more familiar to me. I like her (I also had a great grand mother wearing breeches, and smoking a pipe, helping the poor in her domain, riding a horse, and… gambling…) 🙂

Elisabet (his wife) died at Halle/river Saale May 5th, 1943. Her urn was burried at Glaubitten (Globitty/Poland)

Otto Boehm was a quiet retired military man and his wife Elisabet was an extremely active woman more interested in ruling and working for her women association than in family matters. (She did wear the breeches)

The mother of Elisabet Boehm (Steppuhn) was Emilie Dorothea Caroline Roggerath. She was born at Gardelegen, November 6th, 1826. She died at Liekeim , May 8th, 1896

Her Husband was (acc. my resources) Hermann Julius Steppuhn. He was born at Lackmedien, May 14th 1827 and died at Liekeim May 5th, 1907

I am a member of the Boehm family.