I have always wanted to visit Weklice (Wöklitz).
Why should a little village in the middle of nowhere be so interesting?
Oh, well.

In the beginning of our century (ca. year 2005), there was an archaeological excavation held there. It revealed (among other numerous very interesting burials) a rich grave of a woman. She was announced to have been „a Gothic Princess”.

Before I write about her – here is some brief information about the village.

Today Weklice is inhabited by ca 110/112 people. It has lost its historical look, as after WWII new people settled in former Prussia, importing their own habits and customs, and not always understanding the richness of the village entourage, nor the history of the land. 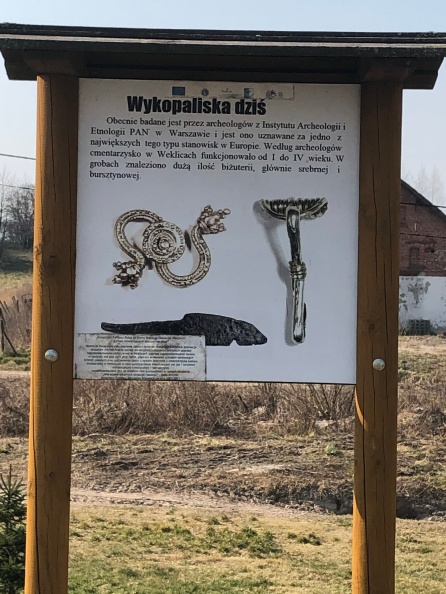 The history of Weklice goes back to at least the beginning of our era. In the beginning of the 21st century it became famous after the series of archaeological discoveries of the Wielbark culture identified with the Goth and Gepid tribes from Scandinavia. According to the information from the historians and archaeologists, after the departure ( to the south) of a significant part of the Goths and Gepids in the 4th century AD, the vicinity of Weklice was occupied by the West Baltic population, later called Aesti or Prussians. As confirmed by much later Teutonic documents, the village also had the Prussian name Pomen, Pomenen. A few kilometers northwest of the village, Prussians built three defensive strongholds, which remains can still be found today. The documents from the 14th century, show the 13th and 14th century Weklice as a center of the local Teutonic administration with the court of the Prussian bailiff, located near a stronghold. At some point, it looks as if it was a continuation of the important role of this place from the time of the excavated “ancient” cemetery and the settlement of the Wielbark culture population of high social status.

The cemetery (currently dated from 1st – 4th century CE) unveiled unusually rich finds. It allows to presume, that Weklice might have been a significant place. Maybe a center of power (?), during the era of the Roman influence times. The imports from Roman Empire that were found in the graves, proved contacts of the local population with the Roman provinces.

As the description of one particular grave says, there were: (…) exceptionally numerous decorations and jewelry: a bronze needle, a golden S-shaped clip, two gold beads, three silver clasps, a gold-plated disc clasp with a double portrait of the emperors Marcus Aurelius and Lucius Verus, a brown belt buckle with leather remnants and a brown tip of a thong and four silver bracelets (…)

Here is the description of the grave – in rough translation:

„(…) the skeleton was in a partial state. The body was folded in a crate in a half-turn position on the right side with knees bent. Parts of the costume were found at the skeleton. On the skull at the left temple – a bronze needle was found. A sinusoidal buckle and 2 gold beads were found at the mandible. the beads looked like they were hung. Two silver clasps were also found. One under the skull vault. The other clasp was located on the chest. A silver clasp was found on the left shoulder, and a silver, gold-plated clasp with the reverse portrait of the emperors Marcus Aurelius and Lucius Venus was found at the level of the lower ribs. A bronze belt buckle with skin residue was found around the skeleton’s hips. Lower, a thong tip was found at the knees. The skeleton had viper and serpentine silver bracelets on each arm.  At the northern corner of the chest three vessels were found: the entire Terra Sigilata goblet has been preserved. And inside it lay a clay scyphos cup with a green engobe (that is, a coating), covered with glaze, and cracked. A bronze cauldron lay sideways nearby, obliquely grooved, crushed under the weight of the earth.”*