Frombork is famous for its Cathedral – one of the biggest in Europe – and also it was here that the famous Nicolaus Copernicus spent more than 30 years of his life, and where he finally died and was buried. Several years ago his grave was found after centuries of searching… I wrote about it earlier here…

In Frombork – besides visiting the Cathedral – one should also visit the Holy Spirit Hospital. 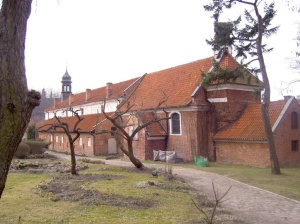 Tourists go there very rarely. And I can’t say why – maybe it is so because the place is situated about 300 meters east from the Cathedral Hill, maybe because of the opening hours – which are (even in summer) too short… Or maybe it is due to the tradition and lack of knowledge among the organizers of tours… Nevertheless the place is almost always quiet. Maybe now it shall change a bit – as in the nearest vicinity a new restaurant (and a very good one it is) opened…

So after a visit in the splendid cathedral (where the sound delays about 7 seconds!) I always go to the Hospital.

Around the building – a garden (herbarium) – was organized. That is why I love it in spring and summer – when all flowers and bushes bloom.

Most of the medieval hospitals were self-sufficient, and so here today – it was the aim to show what herbs were used once… It then can be understood why the herbalists were so feared centuries ago, and what power we still have. I mean of course those of us who know how – and what herbs to use, to prevent one being the patient of the health care…

But the hospital has also something which is a real attraction – “THREE COWS ON THE GABLE” as we call it… It is a huge storks’ nest weighing 1,5 tonnes. 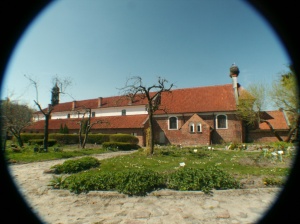 On the above pictures: the “3 cows on the gable” – The south part of the hospital as well as the said nest…
The nest was cut several times so as not to collapse and pull down the gable on which it was built by the family of the white stork years ago.

The interior of the hospital shows an interesting exhibition – it is all about the history of medicine – also in the region. In the so-called side aisles there were 12 small cells (6 on each side of the main room) and each of them had a screen wall (the outline still can be seen on the floor).

Such hospitals were located outside the town walls; on the water fronts, also near the bridges.

The building of such hospital consisted of the main room, which played the role of an infirmary, dining room as well as the room for praying for the ill and old staying there. It also had a chapel (here it was St. Anne’s Chapel) in the eastern part of the main room. It was situated in the apse, and was usually opened to the room. Sometimes however they had a timber screen.

Above is the photo of the interior of the Holy Spirit Hospital in Frombork – the picture was taken in 2007 when the restoration works were starting.

The history of the Holly Spirit (Ghost) Hospital in Frombork is a typical one for the Warmia (Ermland) Region. Erected in the 14 century then reorganized in the next one, in the 17th rebuild and modernized according to the needs of the times as well as the developing Chapter. A short but interesting article on the history of the town can be found here.

In the apse of the St. Anne’s Chapel there is a very interesting painting of the Last Judgement.

And it was this mural to which we devoted most of our time during our stay in Frombork. We discussed the presentation of sins in the painting. Now, everything is very well visible after the last renovation.

And the sins are (we are speaking about the deadly sins here)
1. Luxuria (Extravagance but should be Lust)
2. Gula (Gluttony)
3. Avaritia (Avarice/Greed)
4. Acedia (Acedia/Discouragement)
5. Ira (Wrath)
6. Invidia (Envy)
7. Superbia (Pride)
I found an interesting article on Wikipedia

Dramatis personæ of the show are listed below:
• Christ sitting on the beam – it is a rainbow as a symbol of “coalition” (it is easier to describe it in Polish) ,
• Holy Mother,
• St. John (The Baptist or Evangelist),
• Archangel Michael weighing souls,
• ones arising from the graves,
• devils
• sinners,
• Angels blowing the horns.

It is not only here that we have the Last Judgement pictured – in North Poland we can see it in Toruń (both in St. Johns’ Church as well as in St. James’ and also in Starogard Gdański (Preussisch Stargard) in St. Matheus’ (and I have not a single photo of them! And just to think that I visit the said towns so often!! More – I guide there!!!)

This picture here – in Frombork is quite different from the others. Also, as far as the design is concerned. It was painted in the whole apse, and probably the painter was Christoph Blumenroth – the town scribe. We know that in 1434 he rewrote Bible for Friedrich von Salendorf – the canon priest in Frombork. His style of drawing was recognized during the research on the Last Judgement in St. Anne’s Chapel in Frombork’s hospital. (by the way – Salendorf’s Bible is in Sweden – it was taken during the Swedish Deluge in the 17th century).

During its existence the Frombork Last Judgement went through three renovations, one in 1937, second in 1960-61, and the third – last one few years ago. Christ sits on the double arch (beam – however in Polish we call it Rainbow Arch – as the rainbow symbolizes the alliance between God and His people) within an aureole called Mandorla and has behind him a cross nimbus. On His arms He has a red coat with green sleeves. The coat is opened so as to show His wounds (bleeding wounds) He raised both his hands in a gesture of blessing. From His mouth three lilies and a sword come out – lilies to His right and the sword to His left hand side. Such picture of Christ is called Christ the Redeemer.

On the side of the Saved – there stands Avvocata (Madonna the advocate of humanity) known also as Mater Misericordiae; here she is the Madonna of the Coat of Mercy – the Lady of Mercy (that is why she has the coat under which the souls are seeking shelter. It is very interesting depiction echoing the medieval custom – when a Lady was able to give shelter to the oppressed.

Both – Madonna and St. John are the advocates of the human kind. 4 angels blow the trumpets on both sides of Christ.

The whole depiction has 4 levels and is shown in 19 scenes.

Archangel Michael is weighing the souls

The scales according to the description in the Frombork Commentaries – resemble boats. To me – both are baskets drawn schematically. On the right scale – the lower one – the character sitting there has something strange in his hands – a triangle in one hand and a knife or a crystal in the other one… But maybe Margaret was right and it is not a triangle, but a schematic depiction of the Holy Trinity??
On the right scale there sits a character which is loaded with a mill stone, also a devil is standing on the edge of the basket – trying to pull the scale down. The devil is green – it is so cute and has a rather pleasant mouth (the first thing I thought of was Toadie – one of the heroes of the Gummi Bears). I realise however that in the times when the picture was being painted such depiction of the devil must have been a frightening one….

Why a green devil? I know that in medieval times everything had a meaning. So why green??? Especially that Christ’s sleeves are green too. Maybe it is because of the ambivalent treatment of colours or symbols (as in Hans Memling’s Last Judgement – the peacock’s feathers…)

Further sinners and devils can be seen.

One of the devils is pulling a sinner on a thick rope, and the sinner is an usurer – even though the devil pulls him, he manages to throw a coin to the basket or chest. Very interesting is what he has tied to his belt. Is it a rosary or is it an abacus? 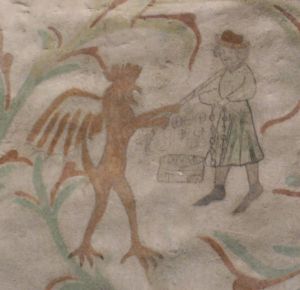 This devil is shown as a cock, – but he is red instead of being black – as he should be!!!

I was struck by this depiction as the devil generally was shown as a black cock (see: Christian Bestiary by prof. St. Kobielus)
Maybe however the restoration was made in a wrong way – as years ago was done in Malbork. Black became red or should I write rusty… It is because wrong colours were used or so.

Maybe the colours were used in a wrong way or the wrong ones and the black reddened….

Below – very near to the infernal fire there are two characters – one is definitely rich –and is kneeling.

In front of him is a … well it is something that resembles either a pillow or a sack (with a cross). This rich (proud) one has a devil behind his back. And there is another one – a humble one standing in a pose full of humility with his arms crossed on his chest. He has an angel guardian behind him. Is this Pride shown in contrast to humility?

Near to the centre a devil pictured as a bear, carries a sinner in a basket – on his back.

It is a very interesting depiction – as the devil has an ugly snout repeated twice – on his buttock as well as on his knee. It means that the bad inclinations are the always the low ones – literally the low ones. The character in the basket has a triangle in his hand… The bear was the attribute of wrath, lust, laziness, force. Personifications of Lust and Wrath usually ride a bear. Should this be Wrath then? But what does that triangle mean???

As for Lust – we have his sin on the left hand side. There is a couple.

The man holds a knot in his hand – should it be that he is married and is tempted to sin? And the woman has a ring – huge one (as a symbol of engagement?) Even if I read it wrong – the fact is that both the man and the woman are tempted by devils behind them – this definitely is the sin of Lust.
And what is interesting – one of the devils has horns (on the man’s side) and the other is a bear….

Above this couple there is a sign Superbia (Pride) 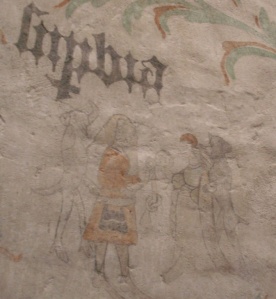 Superbia over (above) Lust? Here?
Does it mean that to stand against the holy bonds of marriage one has to be very arrogant? Superbia here could mean being arrogant… ?

Looking slightly above the couple one can see a satisfied devil pushing a wheel barrow, in which there is a character with a pouch in his hand and with a bright cap on his head.

This is the personification of avarice.

And near that two devils are carrying a stretcher with a drinker sitting comfortably with a barrel near his legs, and with a glass in his hand. Someone during one of the restoration made a silly mistake.

One of the devils – the picture of which was probably very much destroyed – was painted as a stretcher-carrier. Even a characteristic cap was painted on his head….

Above this depiction – there is a devil holding a character „hanging down” from his back. DL suggests Laziness – as this character is completely loose, and literally dangles. No motion, no action – nothing. 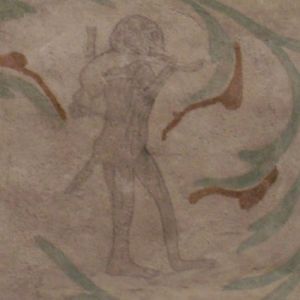 I shall come back to the subject of sins, as medieval sins are a very interesting theme…