NEITHER RASH NOR TIMID…

That is how GDANSK was called throughout its history
The town was once the main port of Polish Kingdom; it also was the main  recipient of splendors and privileges – granted by the Polish kings.

And in the 20th century it was the City which started the political changes on the map of Europe.

The Berlin Wall would have collapsed anyway – because of the changes in European mentality, but it might have taken longer if not for SOLIDARITY which has its roots in GDANSK.

We might say that all the political changes started in Gdansk… 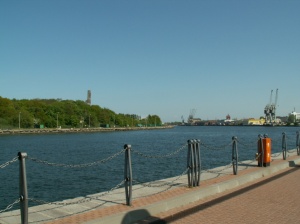 It had been Poland’s main port on the Baltic with short interval of the Teutonic history (being however a very inspiring one too).

It stayed within the Polish Kingdom until the 18th century, being a home of various nations and languages. Then Poland lost independence. It was torn apart into three – the east was taken by Russia, south taken by Austria and west together with the north – taken by Germany- or German Prussia, as we call the country. (simplifying the historical geography – the north of Poland is the historical Prussian land).

By the way – the name “Spruce tree” comes from here… It was in the times of HRM Queen Elisabeth I of England. She was preparing the country for the fight against the Spanish Armada. The Polish Kingdom was mighty then and was one of Europe’s main suppliers of timber. (The country still has vast forests…) So when the trees for masts arrived – they were marked as Spruce (in Polish: “z Prus” meaning: from Prussia). Also oak trees were exported through Gdansk to England. 4 thousand oak trunks were needed to build an average sized ship.

Today – the City is a splendid start for tours around the north part of Poland. It has flight connections with main cities of Europe, has a seaport with a ferry terminal, many hotels and pensions….

And most of all – the city has a unique atmosphere and beauty.

Although it was so much damaged during the fights of 1945, it was splendidly rebuilt and restored.

I can say it is my town too, because my family had belonged to the city since the beginning of the 17th century… They were one of those noble families taking loans from the city. And finally they decided to settle in the near vicinities of Gdansk – the Aurea Porta of the Polish Kingdom.

My father returned to Gdansk right after the great fire of March 1945, and finally he brought my Mum here. And then I was born.  Although I was brought up abroad, but I can and want to live only in Gdansk. I complain about it but I would never leave.

Silly and sentimental – someone might say. Especially that we all live in the so called global world. But well… I don’t care.

I am a Gdansk born citizen, and a one with so very historical background.

I could say – proud to be a Gdansk born.